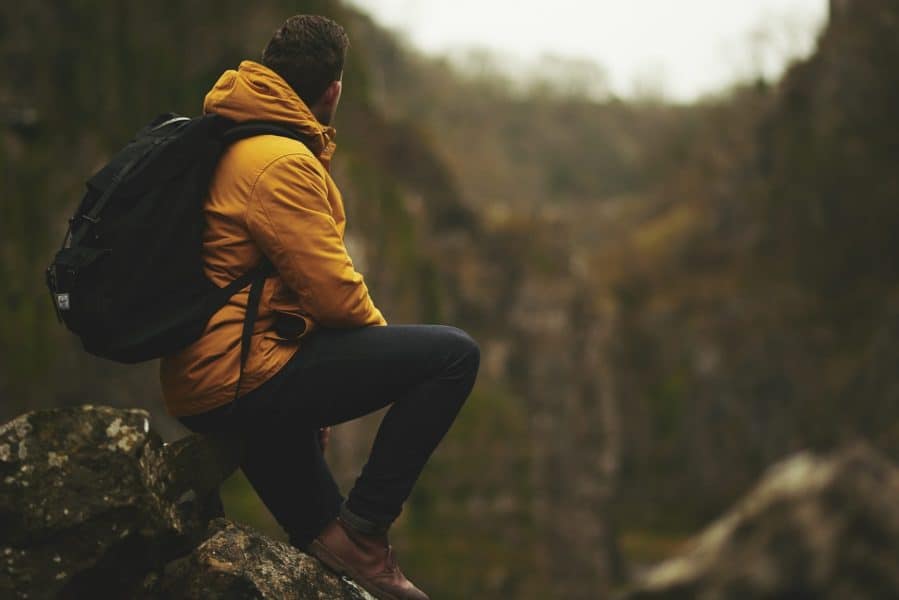 After experimenting with my Fitbit Versa, I can quite easily say that it is the best Fitbit for hiking, indoor swimming, and cycling in 2021.

The reason that I’m choosing this watch over the more expensive one – Fitbit Ionic(which I have recently reviewed here) for hiking and indoor swimming, is first because when hiking and swimming and cycling indoor, there is no need for a built-in GPS that makes the watch bigger and pricier.

And secondly, because of its improved style and design.

In late 2019, after I wrote this review on the Versa, Fitbit has released the second generation of this popular watch – the Versa 2.
The Versa 2 features a larger, clear AMOLED screen, and it comes with Amazon’s popular voice assistant, Alexa, built-in,Alongside it, you’ll find natural sync with Spotify as a music app, and Fitbit’s dedicated mobile payment service.
Fitbit has also improved the battery to an impressive 5 days of use, the processor, and added minor visual changes that makes the Versa 2 a huge competitor to the Apple watch in 2021.
The Versa 2 also does not come with a built-in GPS.
In overall, I do recommend to pay the few extra bucks and to buy the Versa 2 over the Versa that I have reviewed here.

The Fitbit Versa can easily connect to your phone’s GPS and if you, like me, don’t mind taking your phone with you for your hikes than the Versa is the best option for you.

This is also the case whether you are an indoor swimmer. you see, when swimming in a pool, a GPS is useless and not required at all.

A great way to check it out and purchase it is from this seller on Amazon.

Versa, a relatively new watch from Fitbit, was released in the middle of 2018, the Versa 2 was released about a year after.

Versa is a fitness watch which the company hopes that will compete with Apple Watch at a much lower price and by focusing on capabilities that are suitable for a wide audience of users: amateur athletes, veteran athletes, women and men with a different operating systems preferences.
But has Fitbit actually produced a versatile smartwatch that really suits everyone?

As soon as you get Versa out of the box, you understand that the company has learned lessons from its previous, the Ionic watch.

Now we see that this is a fitness watch in the full sense of the word.

The front is made of silver aluminum in fine and prestigious design and the wide pierced strip emphasizes the fact that whoever wears this watch seems to be exercising.

Versa’s design is reminiscent of a square but with a slightly rounded frame.

The 1.3-inch OLED screen offers ultra-high brightness of 1,000 NIT so that the screen’s visibility is not impaired during outdoor training even on a particularly sunny day.

The screen surrounds with a thick frame, which even if it initially looks like a not a very successful design element, it does not really detract from the looks of it and does not affect us at all.

The watch is made from a combination of painted aluminum and glass, while in the bag you find a thin, silky strip that comes in two sizes with a clean design.

The body of the watch combines three physical buttons – two on the right and one on the left, and even if they do not come at the expense of the touch screen, they allow you to navigate between the different watch screens.
I will expand on it later.

In the rear of the Versa are the various sensors: a heart rate monitor, a sensor to measure the oxygen level in the blood and contacts to charge the watch.

I would be happy if Fitbit would also combine wireless charging capabilities since the charger’s connection is a little strange: the charger looks like a plastic clasp whose buckles should be opened before placing the watch in the center.

This is a cumbersome and uncomfortable experience, even after a period of use, and in addition, its size and unique connection make it another accessory that needs to be carried on long journeys.

Versa is available in silver, pink, gold, and black. The latter is the color of the item that I own and used for this review, and it is a little reminiscent of the classical computer watches of Casio which were common before thirty years ago or more.

Minimalism in terms of design allows it to fit into any style of clothing – sporty, elegant and every day – and it is also reflected in the weight which is about 38 grams only.

I believe that this is a rather impressive detail in light of the technical specifications, which includes a battery that offers up to four working days, a pedometer, a pulse meter measuring around the clock, a light meter and support for Bluetooth 4, WiFi and NFC for use as an electronic wallet.

The watch also offers resistance to water and dust, and ultimately maintains impressive dimensions of 29 × 35 mm with a thickness of only 21 mm.

Operation System – Fitbit as a way of life

As stated, Versa is a smartwatch for all intents and purposes.
He runs Fitbit OS 2.0, the new version of the company’s proprietary operating system.

Navigation in the operating system is done by gestures and using the touch screen or physical buttons.

For example, to activate the screen, press the left power button or use the gesture of turning the wrist toward the face, which has proved to be working quite well.

Shutting down the screen is done by pressing the same button again or placing the palm on the screen.

Fitbit OS 2.0 enables, among other things, quick access to common functions. The user interface displays the list of apps divided into pages on the right, with up to four applications per page.

You can also select two apps to access quickly by clicking on each of the buttons on the right side of the watch.

On the left side is the control panel, which allows you to control the music and connect to wireless devices, turn off or turn on the smart power on, and turn off the alarm system that can be accessed from top to bottom or by pressing and holding the top right button.

The alert system supports Android, Windows 10 Mobile and iOS, but only the first supports responsive smart-answer messaging that allows you to choose from the responses offered by the content of the message.

You can choose the apps whose notifications will show on your watch, and , those that do not.

Fitbit enables to download applications from its online the and the company boasts a selection of more than 550 applications such as Hue – to control Philips’ smart lights; Flipboard – Track the latest news headlines.

In addition, there are quite a few applications that enable us to adjust different watch screens, and some even offer widgets to display information in a snap such as heart rate, the number of calories burned, steps count and more.

The selection may be limited compared to other application stores, but the truly essential accessories are already pre-installed, including training tracking and the Deezer music application, which allows you to download playlists of more than 300 songs to the watch so that you can listen to them while exercising without using your phone.

It can be said that Fitbit OS appears to be both the strengths and weakness of the company – on the one hand, it allows Fitbit to precisely match the software to the hardware, and the company is able to compress the watch with impressive capabilities and battery time of more than four days.

But on the other hand, you do not find a large selection of applications here. This disadvantage points to the immaturity of Fitbit’s ecosystem, compared to other competing smartwatches running the Google operating system or Apple’s.

However, it is important to remember that Versa is, first of all, a smart sports watch, and as such it does its work faithfully.

The smart tracking option, which can automatically detect and record aerobic training, is a lot more reliable than what’s available in the latest version of Android Wear.

What’s more, in cases where you forget to activate the monitoring manually, the watch does the job and adds it to the activity log.

In my tests, the smart tracking option proved that it successfully identifies the activity.

The watch detected with no problem running outside or on the elliptical device in the gym, and after adjusting the size of the steps the deviation in the reporting was marginal.

Although Versa allows you to give up on your phone while exercising, outdoor fitness enthusiasts will be disappointed to discover that in the absence of an internal GPS component like the one on the more expensive watch, the Ionic, the new watch relies on the GPS of the smartphone to track the route.

The swimmers among our readers will be delighted to find that Versa offers water resistance to a depth of up to 50 meters.

What’s more, he offers programs for tracking swimming training, and he successfully identifies not only the number of swimming pools but also the swimming style, when he seldom didn’t recognize in my tests the transition from rowing to chest-style.

But while using it, I also learned that the buttons are placed in a slightly problematic way.

They can also be used to pause or stop the workout altogether. Sometimes I found that a certain activity was suspended because one of the buttons was accidentally pressed when bending the wrist.

The watch also incorporated special abilities for women, such as monitoring menstrual cycle ovulation time, with the possibility of cross-checking this information with other vital data to obtain a comprehensive report on the state of health.

When the training is over, the watch displays a workout summary that includes the time passed, the number of calories burned, and more.

More and more information can be obtained on the “Today” screen, which can be accessed in a top-down slide.

This screen provides a weekly summary of the past days by means of graphic measures, so that the number of steps taken can be seen briefly and whether they have exceeded the daily target, the current pulse, and even a summary of the last training.

More information can be found in the main Fitbit application that you install on the phone.

The company also hopes to be the only fitness application that has been used by customers and has integrated capabilities such as sleep quality monitoring, water consumption monitoring, Weight monitoring, Fat levels and even the ability to monitor calorie intake, when the company has a huge database containing thousands of foods whose consumption can be recorded by weight, portions, pieces, and so on.

The app is also used as a social network spring when you can track not only the members using Fitbit devices, but also join targeted groups for motivation, photo sharing, and progress, and that’s where I found answers to different questions about using Versa.

Versa is a multi-sports smartwatch that makes a great job in tracking different sports activities and it is the best Fitbit for hiking, indoor swimming, cycling and basically any sports activity.
If a built-in GPS is not on the top of your priorities than the Versa is my top choice for a Fitbit smartwatch.
It has a friendly design, has a wealth of capabilities and a particularly attractive price tag. It gives great value to the price.