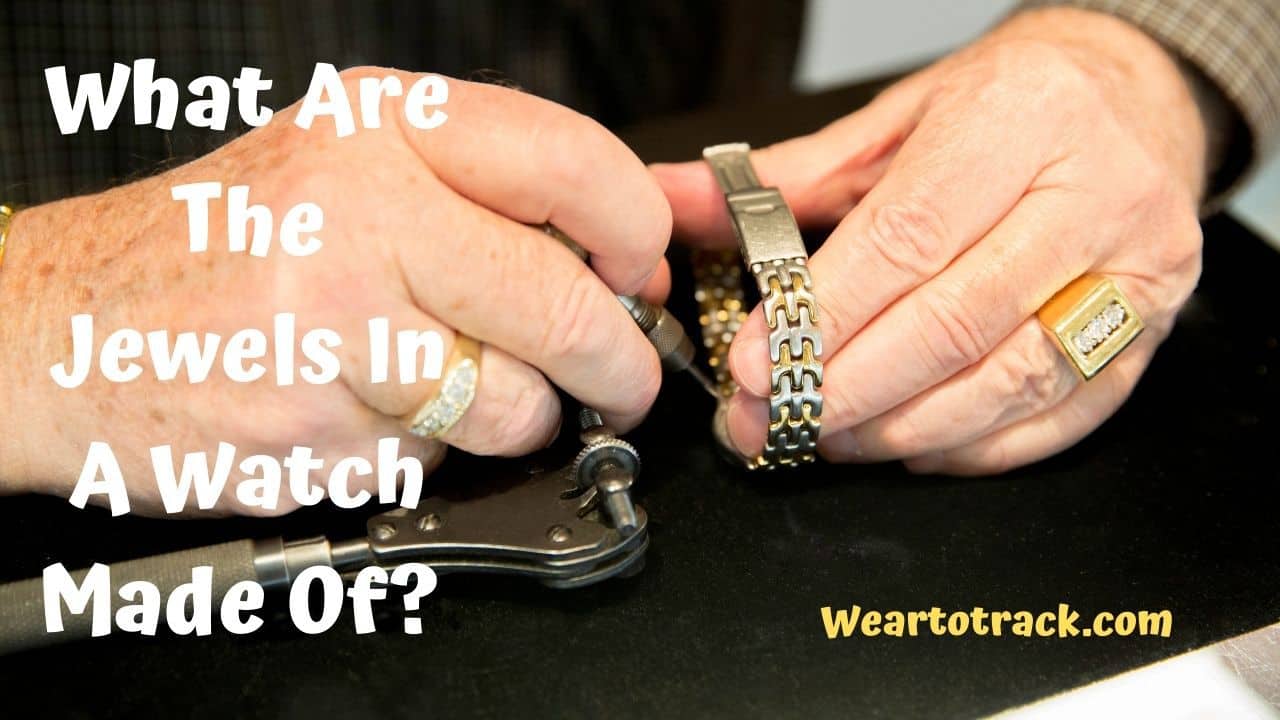 Watch is basically a machine that comes with a lot of moving components, and just like any machine, engineers use many methods to make sure that there’s minimum friction between the components so that the machine works well.

When it comes to watches, engineers use Jewels because they are smooth and they come with minimum friction, which ultimately enhances the life of the watch and makes it accurate.

If your watch also has jewels inside and you are wondering what they are made of, this guide is for you. In this WearToTrack Guide, I will tell you about the materials which are made to make Watch Jewels. I’ll also explain its different types and other details about these jewels. Let’s get started.

What Are The Jewels In A Watch Made Of?

Watches have been around for a long time, and they have improved a lot over the years. If you considered the initial cost of watches, you would notice that they were pretty expensive, and not everyone could afford them. However, over the years, we have seen that they have become more affordable, and one of the major factors is the type of material companies use to make watches.

Initially, Garnet was one of the top choices for Jewel Bearing because it’s very tough, and it usually lasts for years which makes it a great material for Jewels in Watches. In the early Garnet was used in most mechanical watches, but over the years, companies have stopped using it because Garnet is very expensive and it can cost up to $7000 per carat.

Natural Ruby was another very popular material for Jewel Bearing in the late 1800s and early 1900s. Ruby is very durable as a material, and it has a 9 Mohs Scale rating, which means that the material is highly durable.

In 2023, Ruby is not the first choice for watchmakers because it’s a very rare material and also a pretty expensive one. However, some companies might use it for you if you are ready to spend money.

Diamond is arguably one of the most expensive gems out there, and it’s also incredibly rare. Now when it comes to mechanical watches, it was surely not the first choice for watchmakers, but they used Diamond as Jewel Bearing for their premium watches. However, most of the time, they used other materials such as Garnet, Natural Sapphire, and Natural Ruby.

Till the late 1800s, using natural materials such as Sapphire, Ruby, and Garnet was the only choice for watchmakers. However, in the early 1900s, scientists discover the method of making synthetic jewels.

Many watchmakers rushed to adopt synthetic jewels for their watches because synthetic jewels were cost-efficient, and it allowed them to reduce the cost of manufacturing which ultimately made the watches more affordable for users.

In 2023, most mechanical watches come with Scientific Sapphire or Scientific Ruby. These watches are as good as the ones with natural materials because both materials share similar characteristics.

Are Jewels In Watches Real?

There’s no simple answer to this question because it depends on the brand of the watch. Most watches these days use scientific jewels which are artificially prepared, which means that they are not real.

However, if you have an old watch, there’s a possibility that it might have natural Jewels in it because back in the day, manufacturers used natural Sapphire and Natural Ruby in their watches as Jewel Bearings.

What Do Jewels Do In A Watch?

Jewels are mainly used to reduce friction between the various components. Watchmakers use Jewels such as Ruby, Sapphire, and Garnet as bearings for the pivots because they have low friction as compared to other materials.

Which Materials Are Used In Watches As Jewel Bearings In 2023?

In 2023, most watchmakers use Scientific Sapphire and Scientific Ruby in their watches because these materials are very durable and they have less friction because of their smooth surface.

Are Jewels In Watches Valuable?

In most cases, Jewels in Watches are synthetic, and they don’t possess any real value, which means that you can’t sell them for good money. However, if you have a watch with natural Jewels, it can be worth a lot of money.

That’s all, folks. In this guide, I shared the materials which are used as Jewel Bearings in mechanical watches. I also answered some common questions which will help you understand the topic.

If you have any questions or want me to cover any other topic for you, please let me know in the comments. Also, check this guide where I have shared the methods which you can use to know if a watch is original or fake.