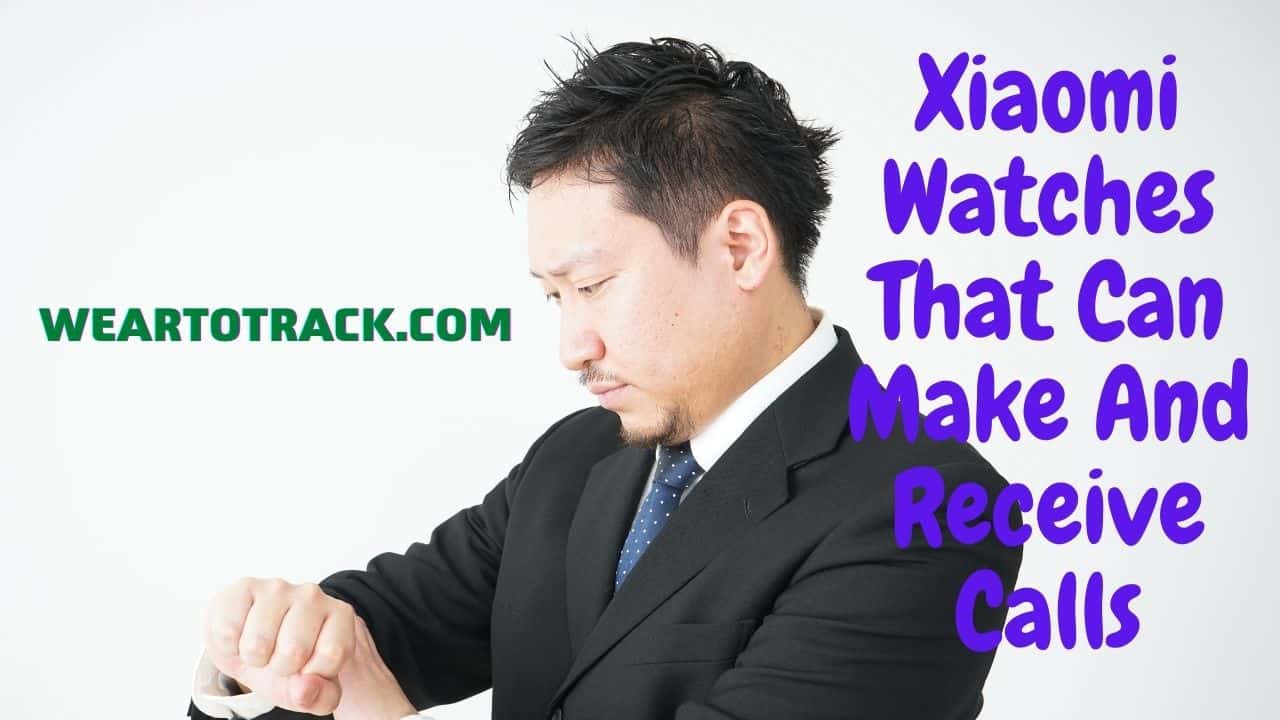 It’s 2023, and Smartwatches are more popular than ever. Xiaomi is one of the major players in the smartwatch industry, and the company offers some really good smartwatches. The company also backs Huami, which is the parent company of another smartwatch brand Amazfit.

So, technically both companies are owned or backed by the same group. In this WearToTrack guide, I’ll feature the Xiaomi and Amazfit Watches that can make and receive calls in 2023. Let’s get started.

Also, make sure to check out my post on Xiaomi Watches with Music Support and Storage In 2023.

Which Xiaomi And Amazfit Watches Can Make Or Receive Calls?

In this section, I’ll share the smartwatches by both companies that can make or receive calls.

The call app in the GTR 3 Pro allows you to make calls directly from the watch, but it’s important that your phone is connected with the watch via Bluetooth.

The watch also comes with a wide range of premium features, including AMOLED Display, PPG 3.0 tracker that can monitor your blood Oxygen, Heart Rate, and other metrics with a simple tap, and more. Overall, if you are looking for a premium Xiaomi watch that can make or receive calls, Amazfit GTR 3 Pro is a solid option for you.

Amazfit Nexo is another smartwatch that you can use to make calls in 2023. It’s a premium smartwatch by the company that comes with 4G LTE e-sim support which means that if you have the e-sim, you can connect it with the watch and use it to make calls without the smartphone.

It’s important to note here that not every network will work with Nexo, and only specific countries and carriers will work with it. According to my research, the following network carriers in these countries support Nexo.

If you have the e-sim of the supported carrier from the above countries, you can connect with Amazfit Nexo and use it to make the calls.

As Nexo is a premium smartwatch, it also comes with premium built quality and AMOLED Display. On top of that, it also comes with the state-of-the-art Huami-PAI Health Assessment system, which provides great information about your physical health based on your activities.

Overall, it’s a really good watch, and if you want a Xiaomi watch with an LTE Connectivity option, Amazfit Nexo is a solid option for you.

Amazfit Verge is one of the best Xiaomi watches that can make or receive calls in 2023. The watch comes with a built-in microphone and speaker, which allow you to respond to the calls directly from the watch. On top of that, it also allows you to make calls from the watch, provided that your phone is connected with your watch.

When it comes to design, Amazfit Verge has a sporty look. The company has used the Gorilla Glass 3, which offers more protection to the display of the watch. Overall, if you want a Sports smartwatch that can make or receive calls, Amazfit Verge is a solid option for you.

Xiaomi Mi Watch is the premium and top-of-the-line smartwatch by the company, and technically it should be able to make or receive calls.

But unfortunately, it only shows the notification of incoming calls, and you can only either reject or mute the call.

Like its pricier siblings, Xiaomi Mi Watch Lite also can’t make or receive calls. It only comes with the caller notification, and the only option you get is to reject the call.

Some websites on the internet claim that Xiaomi Mi Watch Lite can make calls, but it’s not true.

It’s confusing because the design of Mi Watch Lite Resembles with the Mi Watch, which was launched two years back which had the call receiving feature.

Redmi is another brand that is owned and operated by Xiaomi. Redmi Watch 2 Lite is the budget smartwatch by the company, and it comes with a number of great features.

However, like other Xiaomi Watches, Redmi Watch 2 Lite also can’t make or receive calls. The only option you get is the incoming call notification, which you can reject or mute from the watch.

Mi Smart Band 6 is a very popular band by Xiaomi, and it belongs to the popular Mi Band lineup, which was one of the very first wearable products launched by the company.

When it comes to making or receiving calls on Mi Band 6, it’s not possible. However, it comes with the call’s notification feature, which will show on the display if your band is connected to your smartphone.

Amazfit GTS 3 is another premium smartwatch by Xiaomi that is equipped with a premium design and a lot of promising features.

However, it lacks the call-making or receiving feature, which means that you can’t make or receive calls directly from the GTS 3. However, if your watch is connected to the phone, you will get a notification.

Amazfit GTR 3 is the less-pricier sibling of the GTR 3 Pro, and it comes with some good features, but it lacks the call-making or receiving feature. So, if you want a smartwatch that can make or receive calls, you should consider Amazfit GTR 3 Pro.

Amazfit X is a premium watch by the company that comes with advanced features and a futuristic design. However, it doesn’t have a built-in microphone or speaker, which means that you can’t use it to make or receive calls.

No, Stratos 3 can only notify about the incoming call, and you get the option to either reject or mute it. It doesn’t come with a speaker or microphone, which means that you can’t use it to make calls or receive calls.

Amazfit T-Rex Pro is an outdoor sports smartwatch by the company that comes with a rugged built and sporty design. It’s equipped with many features, but it lacks the call-making feature.

Which Xiaomi Watch Can Receive Calls?

The official Website of Xiaomi indicates for some watches that they can receive calls, but it’s only limited to responding to notifications, and actually, you can’t communicate with another person directly from the watch.

Also, the official websites lack information about the specifications of its watches, making it difficult for users to know about the watches.

Does Xiaomi Mi Watch Lite have a microphone?

Like most Xiaomi Watches, Mi Watch Lite also doesn’t come with any microphone, which means that you can’t use it to answer calls.

Also, it doesn’t come with any digital assistant, which is the main reason why there’s no microphone in the watch.

How to Connect the Xiaomi Watch to the Phone?

If you want to receive calls and other notifications on your smartphone, it’s important that both devices are connected.

If you want to connect your watch with the phone, enable Bluetooth on both devices and then go to your smartphone’s Bluetooth recovery section.

Find your device and tap it to connect it. Once both devices are connected, you will receive calls, messages, and other notifications on your smartwatch.

Xiaomi Watches are surely good if you are looking for budget smartwatches with decent features. If you want a Xiaomi watch that can make or receive calls, the few options you have are GTR 3 Pro, Amazfit Nexo, and Amazfit Verge. Now you tell us what you think about Xiaomi Watches?

Are you also surprised about the fact that only 3 Xiaomi watches can make or receive calls? Let me know your thoughts in the comments.

Also, if you are interested in getting a feature-rich smartwatch with a calling feature, you can consider Samsung Watches. If you want, you can check this guide where I have shared the Samsung Watches that you can make calls with!