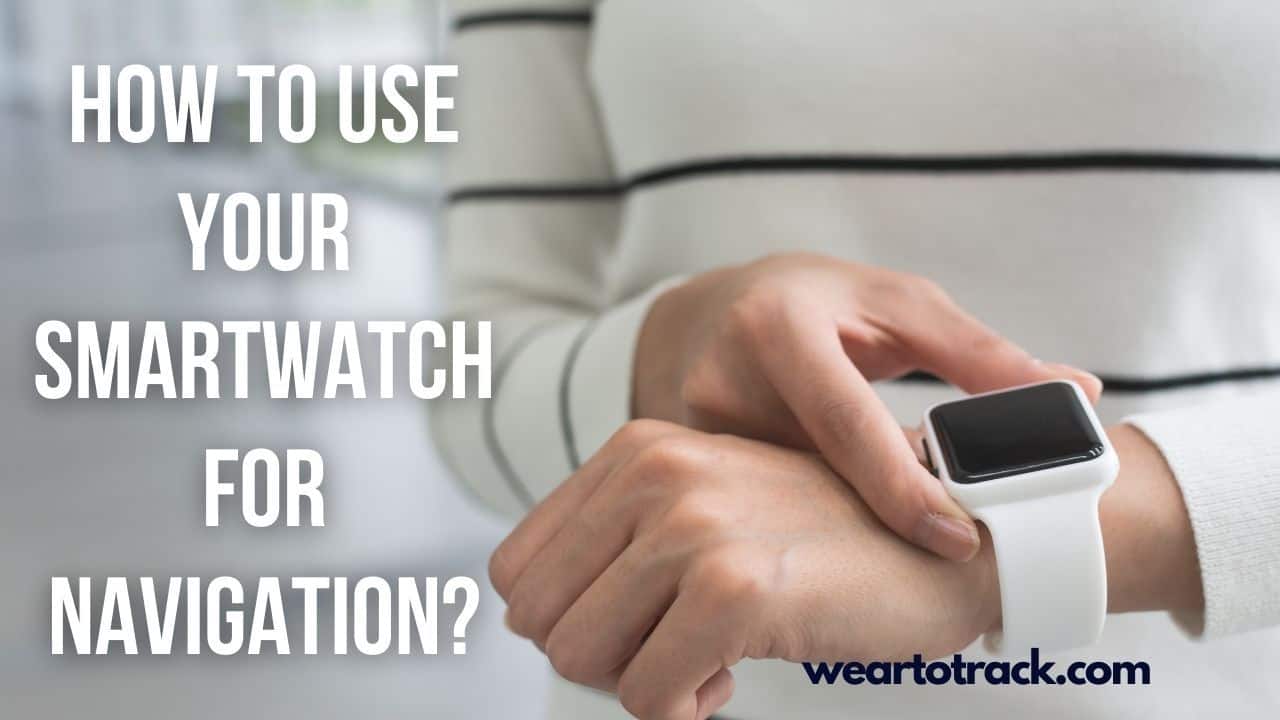 It’s 2023, and Smartwatches are better than ever. Modern smartwatches are capable of making calls, personally assisting you via digital assistants, and even helping you navigate.

If you are also interested in using your Smartwatch for navigation, this guide is for you.

In this WearToTrack Guide, you will learn How to use your Smartwatch for Navigation.

On top of that, I’ll also share the best navigation apps which you can use on modern smartwatches, including Apple Watch and Samsung Galaxy Watches.

Here is a related article that might interest you on the Best 15 Smartwatches for Small Wrists & Women In 2023!

The Technology Behind Navigation On Smartwatches

The GPS technology was developed by the US Forces to provide guidance to their troops out in the field, air, and sea. For years, this technology remained secret, but eventually, it was made public, and now billions of devices use this technology for navigation.

In this system, you get a number of Satellites that work in coordination with each other to provide accurate guidance.

When you send the request for navigation from your Smartwatch, the system allocates three satellites that use the triangulation method to find your accurate position and provide navigation.

This technology has improved a lot over the decades, and it’s the most accurate satellite-based navigation in the world right now.

Can GPS Smartwatches Work Without Internet?

So, if your Internet disconnects, the GPS on your Smartwatch will keep working, but you might not be able to see the map, which will make it difficult for you to navigate.

Here is an article on my website that you must read, its about Which Smartwatch Has Fall Detection?

How To Use Your Smartwatch For Navigation?

Now let’s get to our main topic, and let me explain how you can use your Smartwatch for Navigation. Before you proceed, please make sure that your watch has GPS.

However, if your Smartwatch has GPS, you can proceed and open Navigation & Map app on your Smartwatch. The majority of modern smartwatches these days, such as the Apple Watch and Samsung Galaxy Watch, come with pre-installed navigation apps which you can use for navigation.

If the navigation app is not installed, you can pick from our list, install it and then start using it for navigation.

Once you find the navigation app, open it. Now enter the location where you want to go and start the process. Once navigation starts, your watch will start showing you the directions to your destination.

Which Smartwatches Can Show Maps?

Now when it comes to navigation on smartwatches, most of them can do it efficiently, but many of them don’t show the map on display; instead, they provide turn-by-turn navigation.

In terms of User Experience, it’s surely the right way, but if you are someone who wants to see full maps on your Smartwatch, these are some of the smartwatches that show full maps on the screen.

Apple Maps doesn’t show maps on-screen during navigation; there is a number of apps that show maps on navigation. 2GIS is one of the best 3D-Maps apps on the Apple Watch, which covers over 180 cities and provides accurate navigation along with routes of public transport.

Garmin smartwatches also come with real-time navigation, and they provide complete maps on the screen.

Which Samsung Smartwatches Can Show Maps?

Samsung Smartwatches comes with real-time navigation, but like Apple watch, they also don’t show maps on the screen during navigation.

Also, I was unable to find any 3rd party navigation App on Google Play Store that shows the maps on the screen during navigation.

What Is The Best Navigation Apps For Apple Watch?

Apple Watch is arguably the best Smartwatch for iPhone Users, and the watch has tons of dedicated navigation Apps which you can use for navigation along with Apple Maps. In this section, I’ll share the top-rated and best Navigation Apps for Apple Watch in 2023.

You can easily start the navigation to your desired destination by asking Siri or manually entering it from your Apple Watch.

In Apple Maps, you get every feature that you can expect from a good navigation App. For starters, it comes with turn-by-turn navigation which will make it easier for you to reach your destination.

On top of that, it also provides real-time traffic conditions and other hazards which will allow you to change your route before you end up in a traffic jam. Overall, if you want a navigation app that works flawlessly with Apple Watch, Apple Maps is my top recommendation.

Like Apple Maps, Google Map also comes with tons of features such as turn-by-turn navigation, real-time traffic monitoring, locations of nearby ATMs, Petrol Pumps, and other commodities, and another promising feature.

So, if you are not a fan of Apple Maps and want another accurate navigation app, Google Maps is a great option for you.

Citymapper is another promising navigation app that you can use to get real-time navigation on your Apple Watch.

The best thing about Citymapper is that it works well across all major countries, and it provides the details of nearby businesses, including restaurants, ATMs, and local transport stations.

Also, it comes with an offline map which allows you to keep getting navigation to your destination even if you are Internet is disconnected. Overall, if you want a navigation app with offline map support, Citymapper is a great option for you.

If you are someone who regularly uses public transport, Transit is the best option for you. It’s a navigation app that provides accurate information related to public transport available in your city, including Uber, Lyft, trains, and busses.

The best thing about Transit is that it also tells you about whether the bus is full or not, which allows you to re-evaluate and plan your journey accordingly.

The app provides real-time transit information of over 200 cities across the US, Europe, Australia, and New Zealand.

If you want complete and real-time information on Transit in your city, Transit is the ideal app for you.

What Is The Best Navigation Apps For Samsung Galaxy Watch?

The company has recently transitioned from Tizen OS to WearOS 3, and the modern Galaxy Watch 4 lineup comes with WearOS 3.

At the same time, the older versions, such as Galaxy Watch 3 and earlier versions, come with Tizen OS. In this section, I’ll share the best navigation Apps for both Tizen OS and WearOS 3.

Tizen OS is a great operating system, but it doesn’t have any good navigation app available. However, there’s one workaround solution available that basically displays the google navigation on your Galaxy Watch with Tizen OS.

You can easily install Navigation Pro from Galaxy Store on your Galaxy Watch and connect it with your smartphone.

Once your phone is connected to your watch, you can set the destination on your smartphone and get the turn-by-turn navigation on your Galaxy Watch. Navigation Pro is a premium app, and you can get it for $2.99.

Like any other navigation app, you can use Google Maps on your Galaxy Watch to get real-time turn-by-turn updates.

The app also provides traffic and other hazard updates, which will help you save a lot of your time. Overall, if you are looking for an accurate and free navigation app for your Wear OS 3 watches, Google Maps is an ideal option for you.

For your further inquiry, you may check out this section of the article. Here, we will answer the most common questions regarding ”How To Use Your Smartwatch For Navigation?”

How Do I Use My Navigation On My Smartwatch?

Do Smartwatches Have Navigation?

Not all smartwatches have navigation, but most of the high-end and mid-range smartwatches, such as the Apple Watch and Galaxy Watch 4, come with navigation.

What’s The Best App For Navigation On Smartwatches?

If you use Apple Watch, you have many options, but Apple Maps and Google Maps are two of the best options. However, if you are Wear OS 3 user, you can only use Google Maps, which is one of the best apps for navigation.

How Do I Put GPS On My Smartwatch?

There’s no way to manually install GPS on your Smartwatch, and it comes pre-installed on smartwatches. So, the only way to get GPS is if you replace your Smartwatch and get one with a GPS.

How Do I Add Apps To My Smartwatch?

Most smartwatches these days come with their respective App Stores, which you can use to install Apps. These are the app stores of popular Smartwatches.

Can I Use Google Maps On Garmin Watch?

Garmin Watches use Garmin Connect that displays Maps from various sources such as Google Maps, HERE, Apple Maps, and OpenStreetMap. The company allows you to change your preferred Maps from the settings of Garmin Connect.

Can I Use Google Maps On Galaxy Watch 3?

Does Apple Have A Navigation App?

Yes, Apple Maps is the exclusive navigation App that is designed for Apple Users. It’s available across all Apple products, including Apple Watch, iPhone, and Mac.

Apple Maps vs. Google Maps: Which Is Better?

Smartwatches in 2023 are truly smart, and they are better than ever. Most of them provide excellent navigation, and you can use them to get directions from point A to point B.

In this comprehensive guide, you learned how to use your Smartwatch for navigation. I also shared the best navigation apps for Apple Watch and Galaxy Watch.

If you have any questions, please let me know in the comments. Also, check this guide where I have shared the list of restaurants and other apps that accepts Apple Pay.