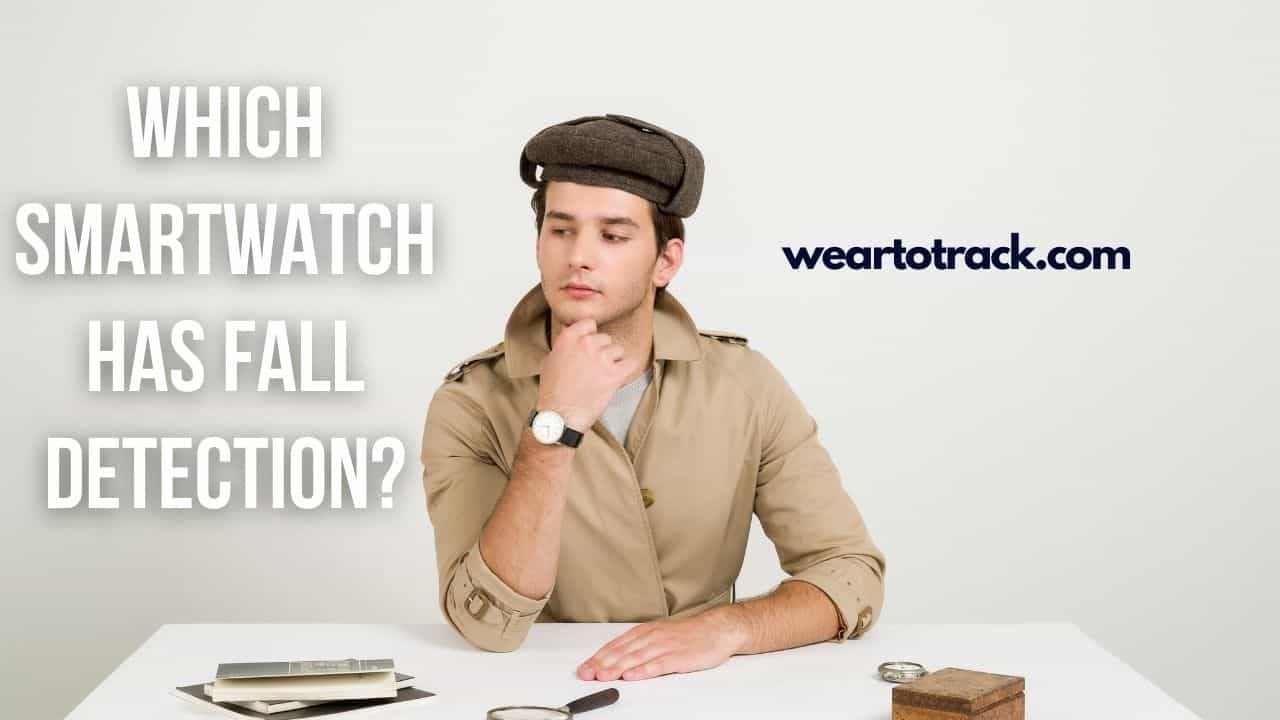 Smartwatches these days come with many promising features, and one of them is Fall Detection. It’s a feature that can potentially save a lot of lives because it automatically alerts your emergency contacts when it detects a hard fall.

This method was first introduced by Apple in Apple Watch, and nowadays, major smartwatches come with this feature.

So, if you are also interested in getting a smartwatch with Fall Detection and want to know which smartwatches have this feature, this guide is for you.

We have a related article for you, you can read on the What Smartwatches Work With Runkeeper? Best 7 In 2022.

In this guide, I’ll also explain how Fall Detection on Smartwatches works and its accuracy.

What Is Fall Detection?

Fall Detection is basically a method where the watch monitors your body movements, and if it detects any sudden hard movement, it automatically sends your details to your emergency contact, which will help you get medical help on time.

How Does A Fall Detection System Works?

Fall Detection is a complex system, and it needs to be very accurate. This feature was first available in Apple Watch, and it has improved a lot over the years.

Now when it comes to working, the smartwatches use an Accelerometer sensor which is basically a highly sensitive sensor that uses low-power radio waves to monitor your movement. This advanced sensor has the ability to detect your movement on a three-axis, which makes it pretty accurate. The sensor is the first part and the second major part is the algorithm which basically validates the detection.

In the second step, the algorithm compares the other data collected by the watch, such as physical activity and body position, which will help the watch to determine if it was within the danger zone. Once the watch determines the Fall has occurred, it will show you the alert, and if the user doesn’t respond within a certain duration, the watch automatically sends the details to the emergency contacts.

Here is a related article that might intrest you on How To Use Your Smartwatch For Navigation?

How Accurate Is Fall Detection?

Fall Detection is surely a very useful feature, especially for people with disabilities. However, many people question its accuracy, and I’ll discuss it in this section.

Now when it comes to the accuracy of Fall Detection, like any other technology, it’s not perfect, and there’s definitely room for improvement available. However, this technology has improved a lot over the years, and many companies, especially Apple, have almost perfected this feature. The fall detection in Apple Watches is the most accurate, which is the reason why most elders and general users prefer it. However, other companies such as Samsung and Garmin are also catching up, and they are perfecting their technology.

In 2022, the fall detection technology in Apple Watches is the best, and the fall detection in other smartwatches such as Samsung and Garmin is also respectable. But, I won’t recommend you to fully rely on it as not technology is completely reliable, but Fall Detection in major smartwatches is pretty reliable, and you can rely on them most of the time.

What Are The Limitations Of Fall Detection?

When it comes to the limitations of Fall Detection, the biggest problem with this technology is that it requires constant access to the network to work. If you are using the Bluetooth version of a smartwatch, it’s important that your watch is connected to the smartphone via Bluetooth and has the required permissions. If your Smartwatch is not connected to your smartphone and it detects any fall, it won’t be able to send messages to your emergency contacts.

However, if you have the LTE version of a smartwatch, you won’t experience any issues because the watch will be able to directly send messages to your emergency contact provided that you have the network subscription.

Which Smartwatch Has Fall Detection In 2022?

Let’s get into it.

When Apple Watch detects any Fall, it immediately shows an alert on display. If the watch detects any movement, it won’t send the SOS message right away, and it will wait for you to respond. However, if there’s no movement for 1 minute, the watch will automatically send SOS Alerts to your emergency contacts so that you get timely help. Apple Watch also sends SOS messages to emergency services such as 911, but it’s only limited to a few regions, including the United States of America.

If we look at the other features of the Apple Watch Series 7, you get features such as ECG, which are very useful, and you can use it to conduct ECG Tests directly from your wrist. Similarly, the premium Apple Watch comes with a Blood Oxygen feature which allows you to know the oxygen saturation levels in your blood.

If we look at the other differences, Apple Watch SE comes with a retina display, and its pricier sibling comes with Always-on Display.

In terms of features, SE comes with all the regular features such as activity tracking, heart-rate monitoring, dedicated workout profiles, and sleep monitoring. Overall, if you want an affordable smartwatch with the best fall detection, Apple Watch SE is the ideal option for you.

Samsung Galaxy Watch 4 is arguably one of the best Smartwatches with Fall Detection for Android Users. As Apple Watch doesn’t work well with Android users, Galaxy Watch 4 is the best replacement for Apple Watch. The new flagship smartwatch by Samsung also comes with fall detection, and it has improved a lot since its inception. The company has also released a number of updates to fix it, and now it works really well.

Fall Detection on Galaxy Watch 4 is not enabled by default, and you will need to activate it from the Galaxy Wearable app. In the settings, go to the SOS section and toggle “When hard fall detected” to blue to enable it. In the next step, you will need to provide permissions and then select your emergency contacts. Once you complete the setup process, Fall Detection will start working, and if the watch detects any hard fall, it will send a message with your current location to your emergency contacts so that you can get timely help.

If we look at the features, Galaxy Watch 3 also comes with ECG and Blood Oxygen Sensor. However, it doesn’t come with sensors to detect body composition. The watch also comes with regular features such as heart-rate monitoring, sleep monitoring, and activity tracking.

Garmin is another major smartwatch company that offers Fall Detection on its selected Models. The company has named it “Incident detection,” but it works very similar to Fall Detection, and the only difference is in the titles.

Garmin Forerunner 945 is a premium smartwatch that comes with Fall Detection. Like other smartwatches, Forerunner 945 also uses an accelerometer to detect any hard fall, and if it detects any, it immediately sends the information to emergency contacts to get timely help.

Forerunner 55’s Incident Detection feature is available in the settings, and you will need to manually activate it. Once it’s activated, the watch will start monitoring your activities, and if it detects any fall, it will automatically send a message with your location to your emergency contacts if you don’t respond within 30 seconds.

Like other Garmin watches, Forerunner 55 is also feature-rich, and it comes with tons of promising features such as workout tracking, heart-rate monitoring, Garmin coach, recovery adviser, race predictor, and other activity-centric features which make it an ideal choice for runners. Overall, if you want a budget smartwatch with Fall Detection, Garmin Forerunner 55 is the ideal option for you.

One of the most promising features of the Huawei Watch 3 is Fall Detection. You will need to manually activate it from the settings, and once it’s activated, it will start monitoring your activities. If Huawei Watch 3 detects any fall, it will show an emergency alert on the screen, and if you don’t respond within a few seconds, the watch will send an emergency SOS to your contacts. The watch also allows you to manually alert emergency services and contacts by pressing the crown 5 times in a row.

If we look at the other features, the watch comes with eSim support, voice controls, activity tracking, heart-rate monitoring, and more. The only downside is that Huawei is currently under sanctions, which means that if you are from the US or European region, you won’t be able to take full benefit of it. However, if you are from Asia and you are getting it at a good price, Huawei Watch 3 will be a good option.

Does Amazfit Watches Have Fall Detection?

Yes, some latest models by Amazfit, such as Bip S, come with Fall Detection, but the problem is that it’s not very accurate, which is the reason why I won’t recommend it. It surely works well from time to time, but it’s not as accurate as other modern smartwatches. So, you should consider it only if you are really tight on budget and want a watch with fall detection.

Does Samsung Smartwatches Have Fall Detection?

Does Fitbit Have Fall Detection?

In my opinion, adding Fall Detection won’t be an issue for a big company like Fitbit because all of its major models, such as Fitbit Sense, Fitbit Versa, and Iconic sensors, have the accelerometer, which is required to detect Falls. Recently Samsung has also added Fall Detection to its older models such as Active 2, Galaxy Watch 3, and Galaxy Watch via software update. So, I hope that the company will work on it and will add Fall Detection for its users.

Which Smartwatch Has The Best Fall Detection?

Xiaomi Mi Watch is the premium smartwatch by the company, and it’s equipped with many great features, but it lacks the Fall Detection feature.

Does Garmin Watches Have Fall Detection?

Garmin is a big smartwatch company with a huge portfolio of smartwatches. The company offers its incident detection feature to only selected models. These are the Garmin Watches that come with a fall Detection Feature.

That’s all, folks. In this guide, you learned how Fall Detection works and how accurate it is. I also shared the best smartwatches with Fall Detection in 2022.

If you have any questions, please let me know in the comments. Also, check this guide where I have shared the fitness trackers with GPS and Music Storage in 2022.