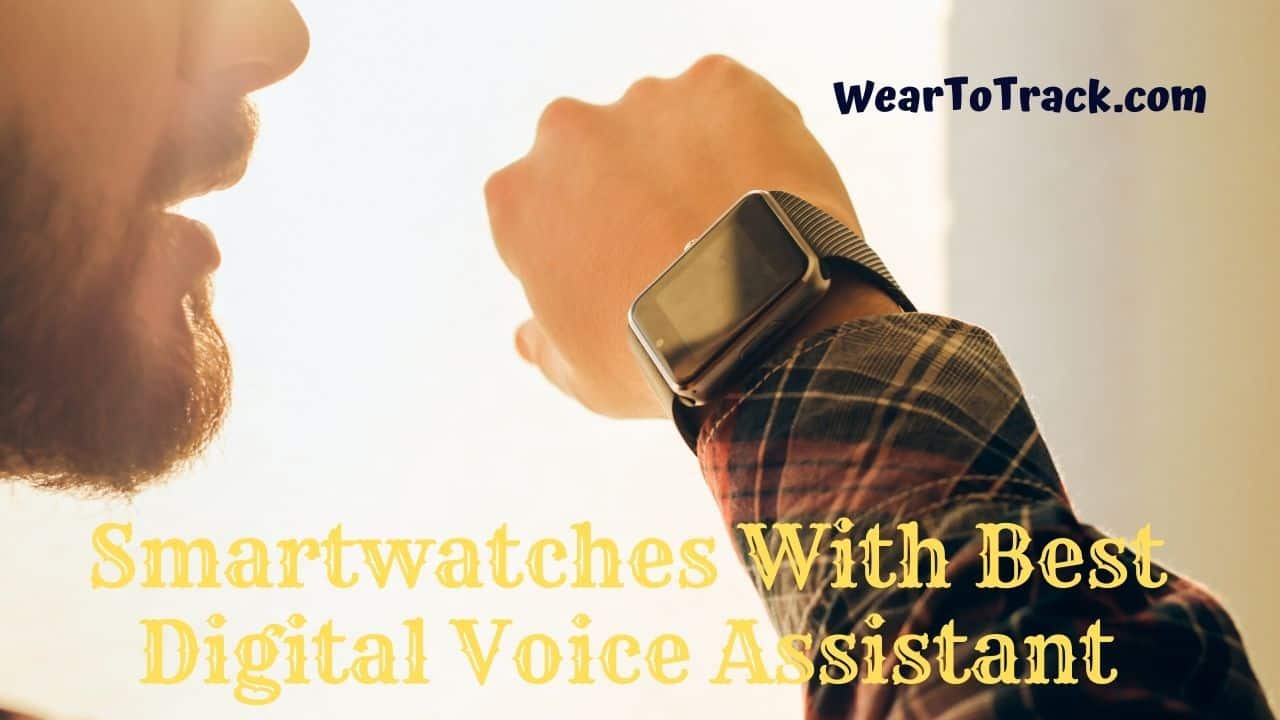 If you are a smartphone user, you have probably come across terms such as Siri and Google Assistant, which are basically Digital Voice Assistants.

Back in the day, these digital assistants were only available on smartphones, but nowadays, many smartwatches come with them.

So, if you are someone who is looking for a smartwatch with a reliable digital assistant, this guide is for you.

Here is an article on my website that you must read, its about Best Smartwatches & Apps For Time Management | Improve Your Productivity.

In this WearToTrack Guide, we will share the smartwatches with the best digital voice assistants in 2023. Let’s get started.

What Is Digital Voice Assistant?

In simple terms, Digital Voice Assistants are basically the software that acts as a bridge between a device and user. These digital voice assistants get commands from their users and translate them for the machine to act.

The best thing about these digital assistants is that they continuously learn about the users and personalize them. For example, Google Assistant adapts to your various voice tones, which makes it easier for it to respond.

Like Google Assistant, other digital assistants such as Apple’s Siri, Amazon’s Alexa, and Samsung’s Bixby have also improved a lot over the years, and now they are better than ever. Now that you know what digital assistants are let me tell you a bit about each Digital Voice Assistant.

Which Voice Assistants Are Available On Modern Smartwatches?

Google Assistant is the second most popular digital voice assistant, which you will find on Android and WearOS Devices. It was launched in 2016, and it has improved a lot over the years.

As Google operates Google Assistant, it’s available on all Android devices by default, and you can easily open it by saying “OK! Google”.

Amazon Alexa is the third most popular digital voice assistant, which you find on Amazon smart devices along with some models of smartwatches by companies such as Fitbit and Amazfit. Amazon Alexa was launched in 2013, and it’s owned and operated by Amazon. You can activate Amazon Alexa by saying “Alexa.”

Bixby is the official voice assistant for Samsung devices, and it was launched back in 2012. You will find Bixby on Samsung smartphones, smartwatches, and other Samsung products. You can activate Bixby by saying its name, “Bixby.”

Are There Other Digital Voice Assistants?

Yes, there are some digital assistants such as Microsoft Cortana and Huawei Celia available, but they are not very popular and not available for smartwatches.

Now that you know about digital assistants let me tell you about the smartwatches with the best digital voice assistants in 2023.

Let’s get into it.

I’ll start with Apple Watch 8 because it’s arguably the Smartwatch with the best digital voice assistant in 2023. It comes with Siri, which is arguably the best and most accurate digital voice assistant available in the market. In Apple Watch 8, you can easily activate Siri by saying “Hey! Siri,” and it can do a lot of your tasks such as settings alarms, opening apps, starting workouts, and many more.

Apart from Siri, Apple Watch 8 comes with many other great features, which makes it the best Smartwatch overall. For starters, Apple Watch Series 8 comes with features such as Fall Detection and ECG, which are the best in class. On top of that, you also get health-centric features such as a blood oxygen saturation sensor, which you can use to know oxygen saturation in your blood. This feature is very useful, especially in the backdrop of Covid-19.

Apple Watch Series 8 is also really good in terms of design. You get a well-built and modern Smartwatch and the option to swap watchbands that allow you to match the bands with your outfits.

Overall, Apple Watch 8 is my #1 recommendation for you if you are an iPhone user because you can only unlock the full potential of this great Smartwatch if you use iPhone.

Apple Watch SE is the budget version of the Apple Watch 7, and it’s not as feature-rich as its pricier siblings. However, it comes with the same digital voice assistant Siri.

In terms of design, Apple Watch SE looks very similar to the Series 7, but it has different materials and lacks features such as ECG and Blood Oxygen Sensor.

So, if you need a smartwatch with the best digital assistant for iPhone on a budget, my recommendation is Apple Watch SE.

On the watch, you can use Google Assistant or Amazon Alexa for various tasks such as setting the alarm, starting a workout, checking the time, and more.

If we look at the features of Fitbit 3, it’s equipped with all the bells and whistles which you can expect from a smartwatch in 2023. In the watch, you get premium sleep tracking, workout tracking, GPS, heart-rate sensor, and many other great features which you can use to stay on top of your fitness game.

Fitbit Versa 3 is undoubtedly a solid smartwatch, and if you want Smartwatch with two digital voice assistants and modern features, you can’t go wrong with Fitbit Versa 3.

If you want to have a digital voice assistant on your Smartwatch and looking for a good designer smartwatch, you can consider Kate Spade Scallop. It’s a WearOS smartwatch which means that Google Assistant comes built-in, and you can use it for various tasks, including setting reminders, alarms, opening apps, and many more.

In terms of features, Kate Spade Scallop is as good as any good modern smartwatch. In the watch, you get workout-tracking, activity tracking, music control, and battery life of over 24 hours which is pretty amazing. Also, the design of Scallop is also pretty modern and stylish, which makes it an ideal option for people who love designer smartwatches.

Fossil is a well-known smartwatch brand, and its smartwatches come with WearOS, which means that you will have access to Google Assistant. Now, when it comes to the best Smartwatch by Fossil, I recommend  Fossil Gen 6 because it’s the best by the company, and it checks all the boxes of a good modern smartwatch.

In Fossil Gen 6, you get a stylish yet minimalistic design and tons of great features such as activity tracking, workout tracking, step count, heart-rate monitoring, sleep tracking, and more, which make it a great choice. So, if you are looking for a minimalistic smartwatch with a digital voice assistant, Fossil Gen 6 is my #1 recommendation.

Montblanc is another very popular designer brand, and Montblanc Summit is the smartwatch range by the company. Now, the Summit 2 is the latest and greatest Smartwatch by Montblanc, and it comes with WearOS, which means that you get access to Google Assistant and other Google Services.

SAMSUNG Galaxy Watch 5 Pro is the premium smartwatch by Samsung, which was launched back in the summer of 2022. The watch comes with a premium design and many advanced features such as ECG and Fall Detection.

In SAMSUNG Galaxy Watch 5 Pro, you get the Tizen OS which comes with Bixby. You can use Bixby for tons of things, including setting alarms, reminders, opening apps, and more.

Galaxy Watch 4 is the latest Smartwatch by Samsung, and it’s the only Samsung smartwatch that comes with WearOS 3. Google has recently collaborated with Samsung on this watch, and both companies are working tirelessly to bring more features to this Smartwatch.

Currently, Galaxy Watch 4 only comes with Bixby, and in my opinion, it’s the best version of Bixby in any Samsung smartwatch out there. The Bixby’s version in Galaxy Watch 4 is clearly better and more responsive than previous versions.

For now, Google Assistant is not available on Galaxy Watch 4, but considering the pace, I’m pretty sure that it will be made available for Galaxy Watch 4’s users very soon.

Apart from these assistants, Galaxy Watch 4 is also feature-rich. In the watch, you get features such as ECG, Fall Detection, Activity tracking, workout tracking, sleep monitoring, stress management, and other promising features which make it a great smartwatch.

So, if you want two of the best digital voice assistants on your Smartwatch, Galaxy Watch 4 is an ideal option for you.

Which Smartwatch Has Google Assistant?

Which Smartwatch Has Amazon Alexa?

Do Garmin Smartwatches Have A Voice Assistant?

When Will Google Assistant Be Available On Galaxy Watch 4?

Do Garmin Watches Have Google Assistant?

No, Google Assistant is not available for Garmin smartwatches. However, if you have Garmin Venu 2 Plus, you can connect it with your Android smartphone and use google assistant on it. It’s important to note here that this feature only works when your watch is connected to your smartphone.

Now you tell me, what do you think about these digital assistants? Do you think that they are actually beneficial, or are they just gimmicks? Let me know your thoughts in the comments section below.

Also, check this interesting guide where I have shared the list of Operating systems that are running on the most popular smartwatches in 2023.