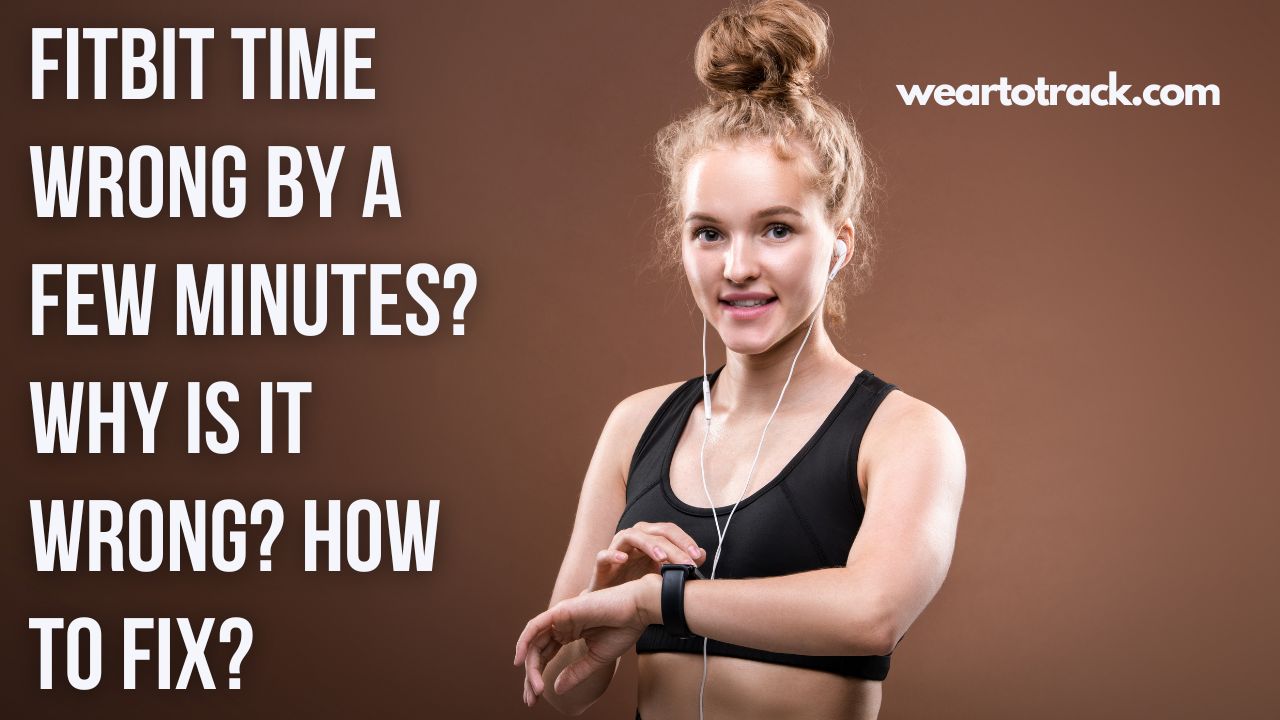 Fitbits these days are more capable than ever, and they have advanced features and algorithms which enable them to track your fitness and other activities.

However, in spite of all these advancements, you can still experience issues such as wrong time, etc., but you don’t have to worry because you can easily fix these issues.

Here is a related article that might interest you on Which Music Apps Work With Fitbits? Which Ones Work Best?

If your Fitbit also shows the wrong time by a few minutes and you want to fix it, I can help. In this WearToTrack guide, I’ll tell you the reasons why your Fitbit is showing the wrong time and ways to fix this problem. So, without any further, let’s get into it.

Like most smartwatches, Fitbit smartwatches also automatically update the time when you connect them with your smartphone, and in most cases, this whole process is completed without any issues.

However, in some very rare cases, Fitbit struggles to update the correct time, and it could be due to various reasons, which I will discuss in the following sections.

So, if your Fitbit is showing the wrong time due to time zone, you can easily fix it from the settings using Fitbit App on your smartphone.

Here’s how you can change time zone settings on Fitbit via Fitbit App.

If the app is set to your selected time zone, then it shows that the time issue is not due to time zone settings, and you can move on to the next possible solutions.

It’s also worth noting here that if you are a frequent Traveller, the app won’t update time-based on your GPS settings. Instead, it will use the App settings to pick the Time zone.

So, if you have traveled to another country with a different time zone, you will need to update the time zone settings from the Fitbit Apps.

Once you correct the Time zone settings, the next step you need to do is to sync your Fitbit with your smartphone, and you can do it by connecting your smartwatch to the smartphone via Bluetooth.

When you connect Fitbit with your smartphone, both devices will exchange data and sync. Similarly, the app will also send the latest settings to the smartwatch, and it will update the time.

If you have followed the above solutions but your Fitbit is still showing the wrong time, I’ll recommend that you restart your Fitbit. The process of manually restarting Fitbit will vary depending on your Fitbit model, but here’s the method which will work for the majority of Fitbit smartwatches.

If you have tried the above methods, but still Fitbit is not showing the correct time, the problem could be due to Bluetooth settings. Bluetooth works well most of the time, but sometimes you can experience trouble due to misconfiguration, and the best way to fix it is to refresh the Bluetooth connection.

Now, if you want to refresh the Bluetooth connection, you will need to delete it from the phone’s settings. Just go to your Bluetooth settings and find the connections section. Here find your Fitbit name and tap Forget this device.

Once you delete the connection, restart your smartphone, and then connect it with your Fitbit. If the problem was due to Bluetooth misconfiguration, it should be solved, and your Fitbit should show the correct time.

All Day Sync is a feature on the Fitbit app which allow the app to sync with a Fitbit smartwatch within range and connect it to the smartphone. The app does it every 15 minutes, and it helps the Fitbit app to exchange data with the smartwatch.

If you disable it, the app won’t be able to connect with your smartwatch and exchange data which can lead to issues such as wrong time. So, if your watch is showing the wrong time, make sure that All Day Sync is enabled on it.

Similarly, the app also comes with the Always connected option, which is there for a better Bluetooth connection between the smartwatch and the smartphone. Like All Day Sync, disabling Always connected can also lead to some issues.

Here’s how you can check All Day Sync and Always connected settings on your Fitbit.

Fitbit App acts as a bridge between your smartphone and the smartwatch, and if it has a glitch or configuration issue, it can lead to issues such as the wrong time.

So, there are two ways you can use to make sure that the Fitbit app is working properly.

The first way is to go to the Google Play Store or App Store and see if there’s any pending update. If an update is available, install the update, restart your phone and check if the issue is resolved.

What If My Fitbit Still Shows The Wrong Time?

If you have used the above solutions and your watch is still showing the wrong time, then the last option you have is to factory reset your smartwatch. The process of doing it can vary depending on the Fitbit model you have, but here’s the general method which will work on most Fitbits.

Before your factory reset your Fitbit, remember that Factory reset will wipe all the data and customization from the Fitbit. So, if you want to protect the data which is not already synced with the Fitbit App, sync it, and then factory reset.

You can easily sync Fitbit data with your smartphone by connecting it and leaving it for a few minutes so that the data is transferred and synced.

Also, you have to check out my post on the Best Fitbit Compatible Apps For Running And Sleep Tracking.

Why Is My Fitbit Watch Time Off?

Fitbit showing the wrong time could be due to various reasons, including misconfiguration, Bluetooth connection, Fitbit App issue, and more. We have provided detailed solutions which you can use to fix this issue.

Can You Manually Set The Time On Fitbit?

No, Fitbit doesn’t allow users to set the time manually on Fitbit smartwatches and fitness trackers. The only way you can use to set time on Fitbit is by setting the time zone, and Fitbit will update the time for you.

Why Is My Fitbit Not Updating Time?

If your Fitbit is not updating time, you don’t have to worry. Just connect it with your smartphone, and it will automatically update the time. If you have connected it to the phone and the watch is still not updating time, then these are some of the possible solutions which you can use to fix this problem.

How Do I Fix The Time On My Fitbit Versa 3?

If your Fitbit Versa 3 is not showing the correct time and you want to fix it, the only way to do it is to connect it with your smartphone and then update Time zone settings from the Fitbit App.

Why Is My Fitbit Losing Minutes?

If your Fitbit is losing minutes, it could be due to syncing issues, so make sure that your watch is connected to your smartphone and synced. Also, ensure that All Day Sync and Always connected options are enabled in the Fitbit App’s settings.

These solutions should fix the time on your Fitbit, and if your Fitbit is still showing the wrong time, the last thing you can do is to contact Fitbit support.

They will ask you for the details, and if necessary, they will recall the device and get it checked by technicians. I hope that you found this guide useful, and if you liked it, please do share it with your friends. Good luck!